Pick a number between 1 and 5… 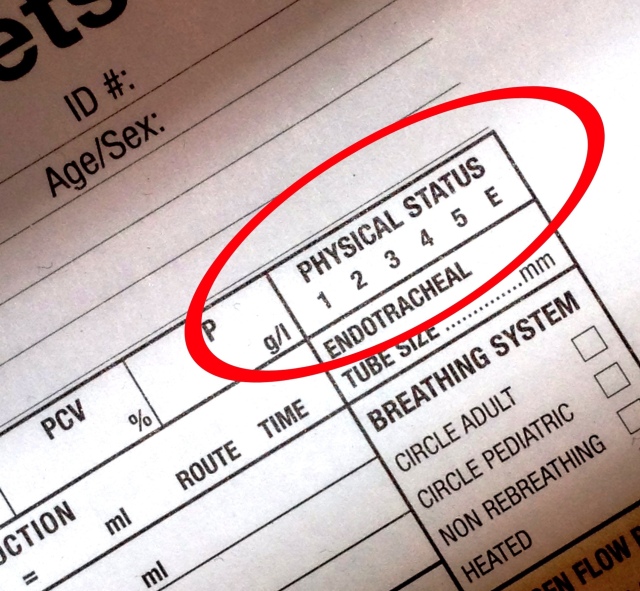 You’ve probably seen it on your anesthesia form, called “Physical Status”. It’s the classification system used to assess the health of patients prior to anesthesia. Studies show that the score you assign to your patient can be an important predictor of the outcome of a procedure. It’s simple: patients with a higher score have a higher risk of anesthetic complications.

The American Society of Anesthesiologists (ASA) adopted a physical status scoring system that’s a subjective assessment of overall health based on five classes.

“E” is placed after the number when the procedure is an emergency. An emergency is when a delay in treatment would significantly increase the threat to the patient’s life or body part.

ASA scores also correlate well with operating time, hospital stay, infection rate, and overall morbidity and mortality. The strength of this association has been well documented and can be considered a predictor of postoperative outcome. So, picking a number between 1 and 5, and assigning your patient its ASA physical status score, is a great way to prepare yourself to protect the life of your patient.

Ken Crump (kencrump.com) is a writer and animal anesthetist and writes Making Anesthesia Easier for Advanced Anesthesia Specialists.  He makes dozens of Continuing Education presentations on veterinary oncology and anesthesia across the United States and in Canada.  Ken retired from Colorado State University in 2008.

This entry was posted in Uncategorized. Bookmark the permalink.