My guess is that you have just purchased a vital signs monitor that includes the ability to monitor CO2.  Kudos to you.  That single purchase has improved the quality of your anesthesia monitoring exponentially.  Nicknamed the “Anesthesia Disaster Early Warning System,” the ability to monitor expired CO2 in real time is said to be responsible for the reduction in death rates during general anesthesia in human medicine from 1 in 5,000 in 1983 to 1 in 300,000 in 2005.  It’s no coincidence that the AAHA Anesthesia Guidelines for Dogs and Cats and Banfield’s comprehensive new book Anesthesia and Analgesia for the Veterinary Practitioner: Canine and Feline (and others) recommend monitoring CO2 during anesthesia as standard of practice.

Measuring exhaled CO2 is noninvasive and can tell us quite a lot about our patient’s cardiovascular and ventilatory status.  But we can get useful information just by detecting CO2, long before it’s measured.  For example, detecting CO2 in expired gas confirms that the endotracheal tube is in the trachea and not in the esophagus.  If you’ve placed an endotracheal tube and your CO2 monitor does not detect any CO2, then the tube is very likely in the esophagus and not the trachea.  It’s good practice to connect the capnometer to the endotracheal tube as soon as intubation is complete – even before you tie the tube in place.  Regardless of your level of skill at intubation, it’s always a comfort to confirm you have been successful.

When I was first began navigating the value of monitoring CO2 in an anesthetized patient, I locked onto the basics.  I learned that CO2 defines ventilation, although I wasn’t sure exactly what that meant.  The easiest way to understand the relationship between carbon dioxide and ventilation is to let go of the notion that breathing is about taking in oxygen.  It took a little while to remove the word ‘oxygen’ from my brain when thinking about breathing.  Taking in oxygen is an important function of breathing, but the stimulation to take a breath is most often triggered by CO2.  Eventually I learned to look at carbon dioxide values when trying to determine a patient’s breathing status, or ventilation status.  Normal values for end-tidal carbon dioxide (ETCO2) are between 35 mmHg and 45 mmHg.  That generally means that if the carbon dioxide reads greater than 45 mmHg, then CO2 is building up in the lungs.  Since the body rids itself of CO2 when it exhales, a buildup of CO2 indicates the body isn’t exhaling often enough.  In other words, the patient is hypoventilating. 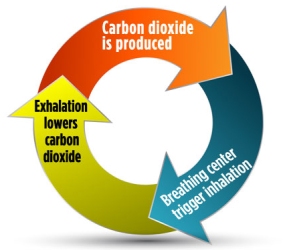 Simple, simple.  To correct hypoventilation, I can breathe for the patient a few extra times each minute until the CO2 is back to within normal limits.  If the capnograph reads below 35 mmHg, then the opposite is true.  There is not enough buildup of CO2 in the lungs and so the patient is hyperventilating.  Although not quite as simple to resolve, the approach to treating hyperventilation is logical: get the patient to breathe less often so CO2 has a chance to build up.  This illustration (at right) shows the influence of carbon dioxide on ventilation.

“Carbon dioxide is produced” everywhere in the body.  Carbon dioxide is a byproduct of metabolism, so it is being dumped into the blood stream from literally everywhere in the body.  It is then transported to the lungs, triggering the breathing center, and is exhaled.  Examining how the carbon dioxide in the blood stream is transported to the lungs is key to recognizing the relationship between ETCO2 and the cardiovascular system.  Transportation of carbon dioxide to the lungs is dependent on the heart. The heart pumps blood.  So, there is a significant relationship between ETCO2 and cardiac function. To take that relationship to the extreme, if the heart is not beating, then blood isn’t moving.  If blood isn’t moving, then CO2 is not brought to the lungs.  If CO2 is not brought to the lungs, then the capnograph can’t read it.  You see where this is going, right?

The relationship of carbon dioxide and the cardiovascular system is actually much deeper than just plus-or-minus CO2 going to the lungs.  There is a lot to discover as you integrate the use of a capnograph in your practice of anesthesia.  You can experience some of the cardiovascular effects of CO2 yourself, simply by holding your breath for awhile.  The changes you may notice – the urgency to breathe (which you once thought to be a need for oxygen, but now realize that it’s the need to get rid of CO2), your increased heart rate, the pounding of your ears (indicating increased cardiac output) – are all related to changing levels of carbon dioxide in your blood.  It’s commonly said that CO2 drives the cardiovascular system, and there’s a lot of truth to that.

There are many resources online to further your understanding of carbon dioxide and capnography.  Here’s a short list of resources I have called upon.

Ken Crump AAS, AHT is a writer and animal anesthetist, and writes Making Anesthesia Easier for DarvallVet, a division of Advanced Anesthesia Specialists.  He makes dozens of Continuing Education presentations on veterinary anesthesia and oncology across the United States and in Canada.  Ken retired from the Veterinary Teaching Hospital at Colorado State University in 2008

This entry was posted in Uncategorized. Bookmark the permalink.